[Editor: This booklet by L. E. Homfray was published during the First World War (1914-1918). As this publication did not have a contents page, a list of the contents has been provided so as to enable easier access to the text.] 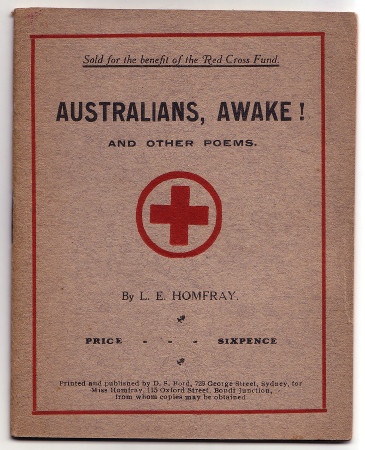 Sold for the benefit of the Red Cross Fund.

My Wish
Australians, Awake!
The Call of the Empire
Sons of Australia
In Memory of our Fallen Heroes
A Mother’s Prayer
“The Little Wooden Ship”
Hymn for Peace: Give Peace in our Time, O Lord
Hymn for Peace
Life’s Journey
Somewhere
Sweethearts
The Following of the Star
What will it Matter?
God’s Heroes
Some Day
Sweet Innocence
Prayer for the Wandering Sheep
Sympathy

Printed and published by D. S. Ford, 729 George Street, Sydney, for
Miss Homfray, 115 Oxford Street, Bondi Junction,
from whom copies may be obtained

This little book is dedicated to our brave Australian heroes.

Some of these poems are appearing for the first time; others have been published in The Women’s Budget, and I wish to thank the Editor for permission to use them. — L.E.H.

Editor’s notes:
Although Australians, Awake! And Other Poems includes no date of publication, its context places it during the First World War (1914-1918), and it was mentioned in The Sydney Morning Herald (Sydney, NSW) on 30 July 1915, p. 7