[Editor: This article, about the views of Lord Brassey regarding Australia, was published in Newcastle Morning Herald & Miners’ Advocate (Newcastle, NSW), 28 December 1887.] Lord Brassey upon Australia. The Pall Mall Gazette published on Monday gives the details of an … END_OF_DOCUMENT_TOKEN_TO_BE_REPLACED

[Editor: This article by Prime Minister John Curtin was published in The Herald (Melbourne, Vic.), 27 December 1941. It was written during the Second World War (1939-1945), almost three weeks after Japan entered the war against the Allies, with its attacks on Pearl Harbour, Hong … END_OF_DOCUMENT_TOKEN_TO_BE_REPLACED

[Editor: This article notes the change in status of the Governor-General of Australia, as well as changes to the titles of the Government and Prime Minister of Australia. It was published in the Kalgoorlie Miner (Kalgoorlie, WA), 2 December 1926.] The King’s … END_OF_DOCUMENT_TOKEN_TO_BE_REPLACED 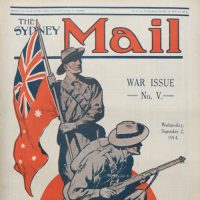 [Editor: This article, by Earle Page, was published in The Sydney Mail (Sydney, NSW), 14 November 1928.] Australia First “We want Australia first!” shouted an interrupting crowd at one of the Prime Minister’s meetings recently. Certainly. All will endorse that Australia … END_OF_DOCUMENT_TOKEN_TO_BE_REPLACED

[Editor: An article regarding the imperial-patriotic relationship between Australia and Britain. Published in The Brisbane Courier, 30 September 1889.] Australian patriotism or nationalism. Speech by Lord Carrington. Speaking at the King’s School, Parramatta, last … END_OF_DOCUMENT_TOKEN_TO_BE_REPLACED