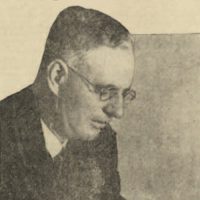 [Editor: This article by Prime Minister John Curtin was published in The Herald (Melbourne, Vic.), 27 December 1941. It was written during the Second World War (1939-1945), almost three weeks after Japan entered the war against the Allies, with its attacks on Pearl Harbour, Hong … END_OF_DOCUMENT_TOKEN_TO_BE_REPLACED

[Editor: This is the text of a radio speech made by Prime Minister John Curtin on 8 December 1941 – the day after the Japanese attacked the USA’s naval base at Pearl Harbor, Hawaii, thereby entering the Second World War against the USA and its allies, including … END_OF_DOCUMENT_TOKEN_TO_BE_REPLACED