(With apologies to Poe.)

Just listen to the clanging of each bell — loco. bells,
That a fearsome railway engine is a-coming on it tells.
In the city you are strolling,
’Cross the street a train comes rolling.
How it quells
Every pleasant thought you had, with its dong-ding-dong!
Like a mournful dirge this seems its solemn song:

“As a thing of death I face you,
As you flee my clang will chase you.
Thro’ the air the sounds menace you
Of the bells! bells! bells!
Of the mournful, scornful, locomotive bells.”

On the train you try to slumber, but each bell — fiendish bell —
Seems a-tolling without number, and you fancy it’s the knell
Of what the yellow papers call the Railway Combine’s capers.
To an end your patience tapers as the bell
Drives off every thought of sleeping with its dong-ding-dong.
Like a mournful dirge this seems its solemn song:

“It’s my fiendish joy to wake you,
Though you turn, the train will shake you,
And I make all sleep forsake you
With my bell-bell-bell!
With my clanging, banging, locomotive bell.”

But the morning air is sweet, and the bell seems to tell
To you quite another meaning, and to outback towns as well.
It seems calling as we’re swinging
Through those little towns, and ringing
Out good chimes of things we’re bringing — chiming bell —
To the plucky out-back people, with its ding-dong-ding, 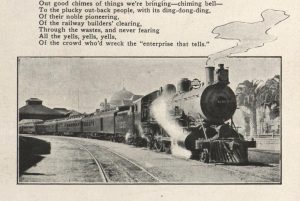 Of their noble pioneering,
Of the railway builders’ clearing,
Through the wastes, and never fearing
All the yells, yells, yells,
Of the crowd who’d wreck the “enterprise that tells.”


Source:
Building and Real Estate (also known as: Building: The Magazine of Interest for the Architect, Builder, Engineer, Property Owner and “The Man Who Thinks”), (Sydney, NSW), 12 March 1915, p. 112

dirge = a song, chant, or music, especially of a mournful nature and slow, used for a funeral, memorial, or commemoration; a lamentation for the dead

knell = the sound of a bell which has been rung slowly (i.e. in a solemn manner), especially for a funeral, or to announce or mark a death; a sound or sign which announces, indicates, foretells, or warns of the death, end, extinction, or failure, of a person, group, movement, civilisation, etc.; a mournful, ominous, or warning sound

outback = remote rural areas; sparsely-inhabited back country; often given as one word and capitalized, “Outback” (variations: out back, outback, out-back, Out Back, Outback)