[Editor: This poem was published in The Bird O’ Freedom (Sydney, NSW), 28 April 1894. Designed to be read as a humorous poem, the poem is about an Aboriginal man’s first contact with a train.]

When the Nigger Saw the Train. 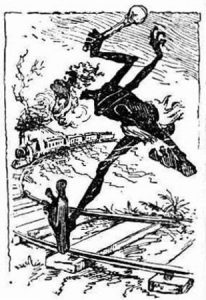 In the guileless, simple savage there was nothing out of place,
In his naive and native manner, or his free and easy face;
He was monarch of the forest and the lord of wild domain,
But Malone he wasn’t in it when that darkie saw the train.
Oh! he fled into the sunset like a greas’d light’ning streak,
And he never ceased amoving for a swift and solid week;
He had reached for all the landscape, and the truth we tell to you,
He obscured the country round him, and monopolised the view.
And he dwindled into distance, and he faded on the plain,
And the record she was busted, when the nigger saw the train.

nigger = a black person; someone of black African racial background; in an historical Australian context, “nigger” could refer to 1) an Australian Aborigine, 2) a Pacific Islander, also known as a kanaka, 3) someone of black African racial origin, also known as a negro, or 4) someone of black Central Asian racial origin, such as people from India (“nigger” is usually regarded as a derogatory term, except that it was often used as a neutral term in historical practice, and except when used by or between people of a black racial background)