[Editor: This poster, an advertisement for migration to Australia from the USA (along with a calendar for 1915), was published under the authority of the Minister of External Affairs (Melbourne), 1914.] 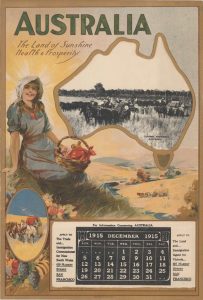 The Land of Sunshine
Health & Prosperity.

Apply to
The Land and….. Immigration Agent for Victoria
687 Market Street, San Francisco 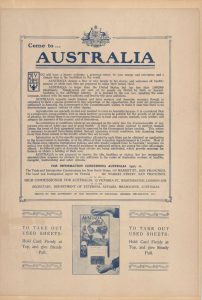 You will have a hearty welcome, a generous return for your energy and enterprise, and a climate that is the healthiest in the world.

AUSTRALIA desires a flow of new people to her shores, and welcomes all healthy persons of white race who are prepared to make their homes there.

AUSTRALIA is larger than the United States, but has less than 5,000,000 inhabitants. Ninety-seven per cent. of its people are British by birth or descent. Australia is the all-British country. It is peopled by the one race, speaking the same language imbued with the same traditions, and fired by the same ambitions.

AUSTRALIA urgently needs farmers and farm workers and domestic servants, though in extending to them a special invitation to take advantage of the opportunities that exist for prosperous settlement in Australia, the Government of the Commonwealth wishes to make it clear that there is no discrimination against settlers of other classes.

Agriculturists are specially invited and assisted to come to Australia because it is considered that in a progressive young country, with so much territory proved to be suitable for the growth of all kinds of produce, for which there is an ever-increasing demand in local and oversea markets, such settlers will advance the interests of the country and of themselves.

No restrictions or conditions whatever are imposed on the entry into the Commonwealth of any persons who are of white race and of good health. If they come under contract to perform manual labour, the terms of their agreement must be approved by the Government before landing. This action is necessary to prevent them being misled, through ignorance of local conditions, into accepting wages lower than those current in the locality where they are to work.

Information as to the specific opportunities afforded by each State can be obtained on application to the Governments in Australia, or at the offices of their respective Agents-General in London. Most of the States have vigorous immigration policies, and offer greatly reduced fares to Australia; reception on arrival, free visits of inspection, financial assistance to approved settlers, are among the other advantages offered. In different parts of Australia large estates are being subdivided, which provide openings for farmers to obtain a holding of their own.

AUSTRALIA is not prepared to receive the idle, thriftless or vicious, but her immigration administration imposes no obstacle to any additions to the ranks of Australian workers of healthy, energetic, hardworking and sober citizens.

For information concerning Australia apply to
The Trade and Immigration Commissioner for New South Wales, 419 Market St., San Francisco.
The Land and Immigration Agent for Victoria – 687 Market Street, San Francisco.
— or to the —
High Commissioner for Australia, 72 Victoria St., Westminster, London S.W.
— or to the —
Secretary, Department of External Affairs, Melbourne, Australia.

Issued by the authority of the Minister of External Affairs, Melbourne, 1914.

Editor’s notes:
The calendar attached to this poster consisted of tear-away sheets, one for each month of the year.
The reverse side of the poster was an advertising screed designed to attract migrants to Australia from the USA.
Various blemishes (as well as the hole punches and string) have been digitally removed from the original graphic, so as to provide a more visually pleasant experience for site users.