[Editor: A poem by “Clancy” (Thomas Gerald Clancy), written as a reply to Banjo Paterson’s poem, “Clancy of the Overflow”.] Clancy’s Reply ’Neath the star-spangled dome Of my Austral home, When watching by the camp fire’s ruddy glow, Oft in the flickering blaze Is … END_OF_DOCUMENT_TOKEN_TO_BE_REPLACED

[Editor: A poem regarding Ned Kelly. Believed to have been written during the Second World War, when Australia was at war with the Japanese (1941-1945); possibly composed around the time of the battle of Milne Bay (August-September 1942).] Ned Kelly was a Gentleman Ned … END_OF_DOCUMENT_TOKEN_TO_BE_REPLACED 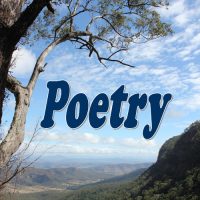 [Editor: This is an anonymously-authored bawdy rhyme, apparently from the early 1900s (or possibly the late 1890s). Some have attributed it to Henry Lawson; however, it is doubtful that he would be the author, given his reported aversion to swearing. The attribution to Lawson is … END_OF_DOCUMENT_TOKEN_TO_BE_REPLACED