[Editor: This article on Sir Henry Parkes was published in the “Portraits of Celebrities” section of The Strand Magazine, 1892.] 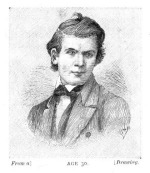 Sir Henry Parkes, Prime Minister of New South Wales, was the son of a Warwickshire farmer, and was born at Stoneleigh. At twenty-four he emigrated to Australia, and for some time worked as an ordinary farm labourer, but when about thirty-five he started The Empire, a daily newspaper, and a few years later was elected to the Legislative Council.

His political life was brilliant, and in 1872 he became Premier for the first time. He has now been at the head of a Government more times, and longer, than any man alive, except Mr. Gladstone. But it is not only as the most conspicuous figure in Australian politics that Sir Henry Parkes is remarkable.

His seventy-seven years weigh lightly upon him — this old political general, with his long white beard and white hair crowning his forehead and falling down upon his shoulders. His house in Balmain, Sydney, Hampton Villa, is an old stone building, surrounded by trees, on a neck of land jutting into Johnston’s Bay.

As a conversationalist he is deeply interesting — full of literary reminiscences ; at one time he is walking with Tennyson, at another chatting with Browning in his lodgings in London, at breakfast with Mr. and Mrs. Gladstone, dining with the President of the American Republic or with the King and Queen of the Belgians, or chatting at a blazing fire with Thomas and Jane Carlyle. 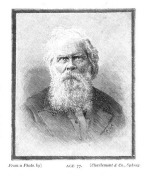 To Sir Henry, Carlyle wrote : “I am greatly pleased with your calm, quiet, lucid, and honest speeches, and with all the useful and manful labour you have so successfully gone through for one of the most sacred interests of human affairs.” This remark refers to Sir Henry’s efforts in the cause of education in Australia.

His talk bristles with “wise saws and instances,” and the fiery element that breathes in his speeches has been kindled by Lowell, Browning, and Tennyson. He is now writing a book which, when published, will, it is predicted, make him for many years the most discussed man in Australia, and perhaps one of the most notable in the British Empire.

His two Russian cats, which purr about his legs, and his large and varied collection of pet animals, are his sole recreation.