[Editor: This collection of poems and short stories, first published in 1894, was Henry Lawson’s first book. It was published by his mother, Louisa Lawson, who owned and edited The Dawn magazine. Henry Lawson’s works had already been published as individual pieces in publications such as The Bulletin, The Boomerang, and The Worker.] 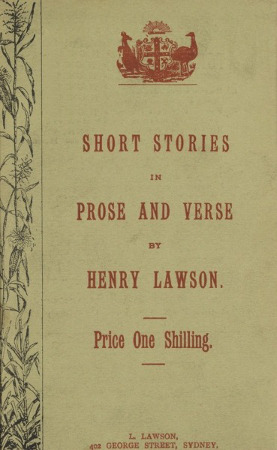 Short Stories in Prose and Verse

We called him “Ally” for short

The Fire at Ross’s Farm

The union buries its dead

A Legend of Coo-e Gully

The mystery of Dave Regan

Trouble on the Selection

[When the Children Come Home]

Editor’s notes:
1) Henry Lawson was not happy with the quality of the book. Inscribed on the title page of the copy he gave to David Scott Mitchell (held in the Mitchell Library, State Library of New South Wales), Lawson has written an inscription, as follows: “This is my first book. Only a few copies were published, fortunately. I withdrew the book from publication. The book should be interesting as a curiosity in printing. H Lawson”.

2) The poems “When the Children Come Home” and “A Derry on a Cove”, as well as the Preface, were included in the book, although they did not appear in the original contents list.