“After the departure of such an able man as Sir John Forrest, any Premier would find great difficulty in administering satisfactorily the affairs of the State.” — Daily Paper. 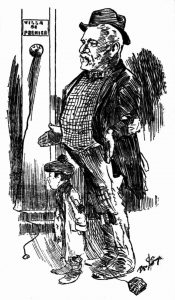 The Bunbury knight to the East has gone,
’Mid the popping of corks you’ll find him,
A softer snap he has taken on
Than the job he left behind him.

An overdraft chills my feeble bones,
And a rare old muddle I’m heir to;
I dread this child’s reproachful tones,
For the Treasury cupboard is bare, too.

My only “sticks” are a makeshift bed
And the stool of office I cling to,
And this in a land where John oft said:
I’d some time reign as a king too.

When they chase me out with Leake’s new broom
And I’ve finally failed to floor them,
I’ll hie me back where the pumpkins bloom
On the pastoral slopes of Northam.

Editor’s notes:
Bunbury knight = a reference to Sir John Forrest (1847-1918), Member for Bunbury (1890-1901) in the state parliament of Western Australia; he was also the first Premier of WA (1890-1901), but resigned from state politics in order to concentrate on a career in the federal arena

’mid = an abbreviation of “amid” or “amidst”: of or in the middle of an area, group, position, etc.

Northam = a town in Western Australia

soliloquising = voicing a soliloquy (talking out loud, but in the manner of speaking to oneself, such as in a theatrical play; delivering a monologue, as if alone)