[Editor: This article, about Australia’s relationship with the countries of the Asia-Pacific, was published in Pix (Sydney, NSW), 19 December 1942.]

Must be “World” Atlantic Charter

Australia, now sacrificing her manpower and wealth for the preservation of her national integrity, will be forced by economic and social considerations to play an important part in the shaping of affairs in the South-West Pacific and in the broader issue of Asiatic reconstruction. Minister for External Affairs (Dr. Evatt) succinctly stated position to House of Representatives:

“Australia, as one of the countries of the South-West Pacific, will have particular interest in closer economic relations with her nearer neighbors.

In the post war world the reorganisation of this region cannot be on the Japanese system. We are now fighting to end that system. Moreover, our post war order in the Pacific cannot be for the sole benefit of one Power or group of Powers. Its dominant purpose must be that of benefitting the people everywhere. If “freedom from want” means anything, it means that the age of unfair exploitation is over. If the attainment of a higher and better standard of life for all the Pacific peoples involves any changes in forms of government or administration either as a means of progress or as a consequence of it, the United Nations must be ready to make the necessary changes …”

For all purposes of national and economic development, Australia is in the Asiatic sphere of international affairs. A new deal for Asia must radically affect the position of the Commonwealth. In terms of practical politics we must take a leading part in the implementing of any fundamental changes. While it is true that the Atlantic Charter (a joint statement of war aims given to the world on August 14, 1941, by Winston Churchill and President Roosevelt) did not sufficiently detail post-war political and economic reconstruction, it contained certain basic ideas which must be the foundation of any effective change. These apply with great force to Asia. The second, third and sixth clauses of the Charter have special application:

“… no territorial changes that do not accord with the freely expressed wishes of the people concerned … respect the right of all peoples to choose the form of government under which they will live; and they wish to see sovereign rights and self-government restored to those who have been forcibly deprived of them … after the final destruction of Nazi tyranny, they hope to see established a peace which will afford to all nations the means of dwelling in safety within their own boundaries, and which will afford assurance that all the men in all the lands may live out their lives in freedom from fear and want.”

To implement these clauses would mean changing the face of present-day Asia. The populations of China, India, Japan (proper) Burma and Manchuria total 924,000,000. The overwhelming majority of these people have a standard of living bordering on starvation. They collectively inhabit countries which are immensely wealthy in natural resources. By the peaceful transfer of population there is ample room for expansion. India, Burma and Manchuria would be among the countries to take advantage of self-government freely determined.

The obverse side of the medal shows that Asia is the last remaining market that has not been thoroughly exploited by commercial development. Within the countries mentioned there is a growing class who, under the cloak of “self-determination” are preparing their respective countries for economic exploitation. This is the case in India. The high state of productivity in such countries as Britain and America forces producers to explore every available market. An outlet must be found for their goods after the war in order to prevent the occurrence of an economic slump, possibly of an intensity far greater than that recently experienced. Since the teeming millions of Asia are all potential customers for some article or other, it is obvious that commercial attention will be centred in this region. How will Australia fare in this market? 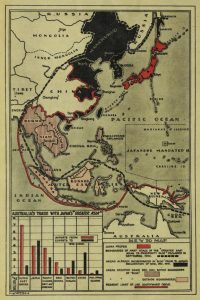 This map clearly illustrates Australia’s geographical and economic relation to Asia; the area covered by the original draft of Japan’s “Co-Prosperity Sphere” and the territory now under Japanese domination. The fact emerges that while it would appear Japan has a firm grip on affairs, actually she is in a most precarious position. The whole of China is covered in “Co-Prosperity” but Japan holds relatively little of that vast country; complete defeat and ejection may not be far distant. In the terms of the Atlantic Charter, Manchuria must be returned to China or given self-government. The same principle applies to Korea and Formosa. The lands occupied since outbreak of war will be wrested from her.

In this vast readjustment many things must affect Australia. Shall we maintain our White Australia policy? Will inter-Empire tariff walls give us favored treatment? Will our methods of production be sufficiently advanced and prices low enough to allow free competition in the great Asiatic markets? Will we strengthen our relations with the Soviet Union, that great Pacific neighbor which stands linking Europe and Asia? These are a few of the outstanding problems confronting post-war Australia.