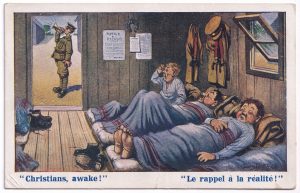 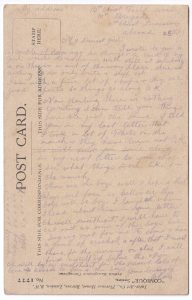 I wrote to you a couple of days ago, so thought a card to my girl would do no harm.

Well, still at Salisbury & as this is an out of the way place, there is nothing to do, only write & sleep late.

I am with a fine lot of chaps & they are good sports, so things go along O.K.

Now darling, there is nothing exciting I can tell you. Things here are just the same.

I told you in my last letter that I took a lot of Photos on the march & they have turned out O.K. So will send you some along in my next letter, so you can see what things were like on the march.

How are the boys? Well, I hope, & that Ray’s sore face is better ere this. Boys will be boys. I laughed when I heard about him in your letter.

Oh well, sweetheart, I will have to cut out, as some of the boys are singing out for me to come & have a game of cricket, & after that I must shave for the morning, or else I will find myself up before the Major.

Oh well, bye bye sweetheart for the present. Lots of love & kisses to you & the boys.

The writer of this postcard is believed to be Charles Fell, of the 1st Australian Convalescent Depot, born in South Melbourne (Victoria) and who lived in Stanmore (New South Wales).
See: 1) “Private Charles Fell”, Australian War Memorial
2) “Fell Charles: SERN 14810”, Discovering Anzacs [a comparison of the abbreviated signature of “Chas” on the postcard, with that of his full signature “Charles” on his Attestation Paper, shows them to be the same handwriting]
3) “Fell, Charles”, Virtual War Memorial Australia

Alb = an abbreviation of the name “Albert”

Amb = an abbreviation of “Ambulance”

Aust = an abbreviation of “Australia” or “Australian”

Chas = an abbreviation of the name “Charles”

ere = (archaic) before (from the Middle English “er”, itself from the Old English “aer”, meaning early or soon)

Ray = an abbreviation of the name “Raymond”

x = a symbol for a kiss (depending on the circumstances, it may indicate a loving kiss, a familial kiss, or a friendly kiss)

[Editor: For ease of reading, the original text has been separated into paragraphs, and punctuation has been inserted as deemed appropriate.]