[Editor: This postcard, which incorporates a photo of military dug outs on a hillside, is from the era of the First World War (1914-1918). The postcard is undated.] 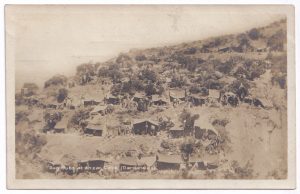 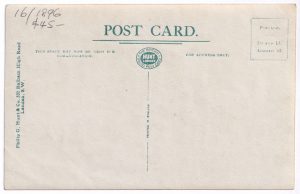 [Photo of military dug outs (in this instance, primarily tents and awnings dug into a hillside) at Anzac Cove, on the Gallipoli peninsula.]

Anzac Cove = a cove on the western coast of the Gallipoli peninsula (part of the section of Eastern Europe held by Turkey), located on the European side of the Dardanelles strait; where the Australian and New Zealand Army Corps (ANZAC) landed and fought against the Turkish army in 1915

Dardanelles = (also known as the Strait of Gallipoli) the strait which connects the Sea of Marmara (north-west end of the strait) with the Aegean Sea (south-east end of the strait), the latter of which connects to the Mediterranean sea; it is bounded on its northern side by the Gallipoli peninsula and on its southern side by the mainland of Turkey; it is considered to be part of the continental boundary between Asia and Europe (thus separating Asian Turkey from European Turkey); it was the site of a military campaign during the First World War, when the Allied powers attacked the Gallipoli peninsula (part of Turkey) in 1915