[Editor: This postcard, which incorporates a photo of a group of unidentified wounded Australian soldiers, was sent by a soldier to his mother, during the era of the First World War (1914-1918). The postcard is undated.] 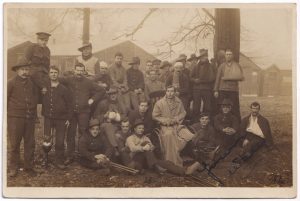 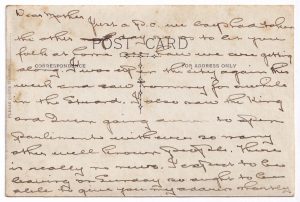 [Photo of a group of wounded Australian soldiers, outside.]

Just a P.C. we chaps had taken the other day so as to let you folk at home see how we were getting along.

I was up in the city again this week and saw Tommy for a while in the Strand. I also saw the King and Queen going across to open Parliament with ever so many other well known people.

There is really no news. I expect to be leaving on Sunday so ought to be able to give you my address shortly.

[No identifying information about the manufacturer was included on the postcard.]

Wally = a diminutive form of “Wallace” or “Walter”

[Editor: For ease of reading, the original text has been separated into paragraphs, and punctuation has been inserted as deemed appropriate.]