[Editor: This postcard, which incorporates a photo of a group of wounded Australian soldiers in a hospital, was sent by a soldier to his mother, during the era of the First World War (1914-1918). The postcard is undated.]

Another photo of our clique 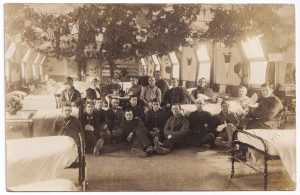 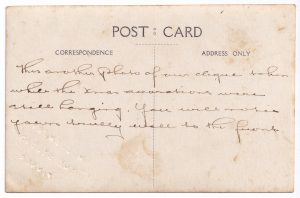 [Photo of a group of wounded Australian soldiers, in a hospital.]

[The manufacturer’s text is embossed in the bottom right corner of the postcard.]

This [is] another photo of our clique taken while the xmas decorations were still hanging. You will notice yours truly well to the front.

The manufacturer’s details (M L Emery, The Studio, Pinner), embossed in the bottom right corner of the postcard, are not easy to read (requiring the turning of the postcard to catch the right angle, under a strong light). However, the photographer’s details have been confirmed by the existence of other instances of work carried out by the same studio.
See: 1) “Pinner Baptist Church, 70 Paines Lane, Pinner, 1910”, Headstone Manor and Museum [located in Pinner View, Harrow, England]
2) “Pinner. Chapel Lane by M.L.Emery, The Studio, Pinner.”, Ebay (listing by “yorkshirebidding”)

Pinner = a suburb in the borough of Harrow (Greater London, England), located north-west of Charing Cross

xmas = an abbreviation of “Christmas”

[Editor: Changed “This another” to “This [is] another” (the square brackets indicate an inserted word).]