[Editor: This article, about attempts made to find and rescue the Burke and Wills expedition, is chapter 34 of “The story of Australia”, by Martin Hambleton, published in The Sunday Mail (Brisbane, Qld.), 17 February 1935.]

The story of Australia. — XXXIV.

Both John McKinlay and William Landsborough, whose exploration work is described hereunder, were men of courage and fortitude, and, although their journeys were, perhaps, not as colourful as those of men of the calibre of Eyre, Sturt, Stuart, Burke and Wills, their discoveries were, nevertheless, of great importance to the growing colonies. They are grouped together because both led expeditions in search of the missing Burke and Wills. 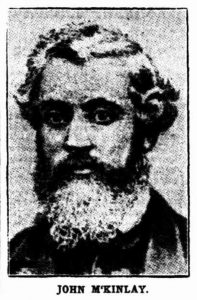 John McKinlay was born at Sandbank, on the Clyde, in 1819. He first came to New South Wales in 1836, to live with his uncle, a wealthy grazier. After gaining experience of sheep farming and bush life, he took up land on the Murray, and became a prominent settler in the district. His early work of exploration was confined to the unoccupied land between the Darling and Lake Torrens, and he was so impressed with the country that he took up several runs in that area.

In 1861 he was appointed leader of the South Australian relief party, organised to search for Burke and Wills. The work of the expedition had already been accomplished by Howitt, although the news had not been received in Adelaide. He left Adelaide on August 16, 1861, with a party of 10 men, four camels, 24 horses, 12 bullocks, and 100 sheep. On September 27 Lake Torrens was crossed, and from there to Lake Hope the journey was made through a dry and stony country. On arriving at Lake Buchanan a depot was formed, and McKinlay, with two white men and a native, struck out for the Barcoo. As they passed through the country they found that some of the natives were wearing European clothes.

On October 20 they reached a lake and found tracks of camels and horses, and a white man’s grave. They picked up a canteen, an exploded Eley cartridge, and a piece of the Nautical Almanac. The grave was opened, and in it they found the body of a European enveloped in a jacket with short sleeves. This was Gray’s grave.

A native who was present informed McKinlay that the whites had been attacked and killed, and that their bodies had been eaten. All their effects had been buried beside the lake which was near by. McKinlay, coming to the conclusion that this must have been the end of the missing expedition, called the place Lake Massacre. The next day a tribe of blacks appeared, evidently bent on mischief, and the leader, fearing that they intended to massacre them, commanded his men to fire upon them, which made the whole lot retire in haste.

On his return to Lake Buchanan news reached him of the finding of King, and the death of Burke and Wills. McKinlay arrived in Adelaide 13 months later, and received a grant of £1000, and in 1863 the Royal Geographical Society presented him with a gold watch. In 1865 he was sent to examine the land between the Adelaide, Liverpool, and Roper Rivers for the purpose of selecting a suitable site for the capital.

Misfortune attended the expedition from the first. A wet season set in and by the time he had reached East Alligator River sudden floods cut him off and hemmed him in. The whole party would have been lost but for the skill displayed by the leader, who made rafts covered with the skins of the horses, by which they returned to Adam Bay. McKinlay, whose health had suffered from the effects of the hardships which he had undergone, settled on a farm near Gawler, and died there on December 31, 1872. At Gawler a monument has been erected to his memory. 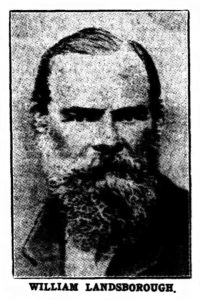 William Landsborough, explorer, was born in Ayrshire, Scotland, and received a good education at Irvine. After he came to Australia he was first unfortunate in settling in New England. Selecting a run on Wide Bay, he was more successful, and in 1856 went farther north to the neighbourhood of Rockhampton. He then discovered Mount Nebo and Fort Cooper, and in 1859 explored Peak Downs and Nogoa.

In 1860 he discovered the head of the Thomson, and in 1861 traced the Gregory and the Herbert Rivers to their sources. He was then requested to head the expedition in search of Burke and Wills, and on February 10, 1862, he and his party started from the Albert River and succeeded in crossing from the Gulf of Carpentaria to Melbourne. Sir Henry Barkly presented him, on November 12, with a service of plate valued at £500. He married the daughter of Captain Rennie, and visited Bombay, the Continent, and England. The president of the Royal Geographical Society presented him with a gold watch.

After two years’ absence he returned to Queensland, and was elected to the Assembly; but, finding the work too onerous, he obtained a situation as Government Resident in the Burke district, at the end of 1865. At the Belyando, in conjunction with Mr. G. Phillips, he discovered the Western River, and traced the Diamantina to its source. At Burketown he found the whole population prostrated by fever, and he moved to Sweer’s Island.

He continued actively to explore the Gulf; but his wife became ill and he lost no time in removing her to Sydney, where she died. In 1868, for some unexplained reason, he was removed from his position. He accepted the office of inspector of brands for East Moreton, and in 1882 he received a grant of £2000 for his services as explorer. He died at Brisbane on May 16, 1886.