[Editor: The Story of the Eureka Stockade was written by John Lynch, regarding various events and people connected to the Eureka Rebellion. It was originally published as a magazine serial story in 1893-1894. As this publication did not have a contents page, a list of the contents has been provided so as to enable easier access to the text.] 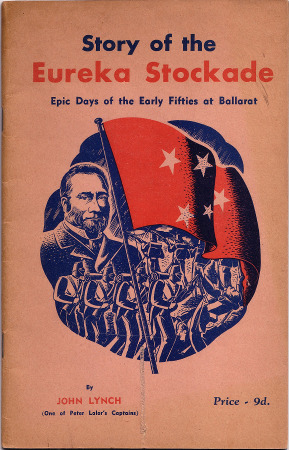 The Story of the Eureka Stockade

(One of Peter Lalor’s Captains)

Editor’s notes:
The cover title was Story of the Eureka Stockade: Epic Days of the Early Fifties at Ballarat.

This booklet was originally published as a monthly series of six articles in The Austral Light: A Catholic Magazine (October 1893 to March 1894). The text was later published by the Australian Catholic Truth Society in a booklet format in two undated editions, one in the 1930s and the other in the 1940s (possibly 1947).