[Editor: This book of poetry by Joseph Furphy was published in 1916. The poems were collected, after Furphy’s death, by his friend Kate Baker.] 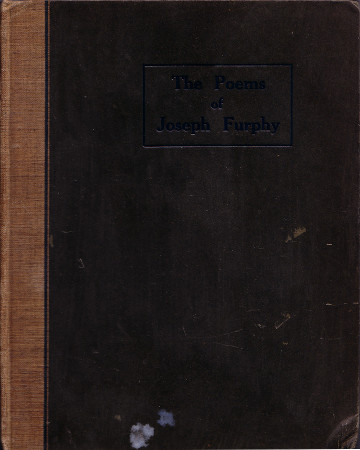 [Tom Collins, author of “Such is Life”]

Collected and edited by K.B.

A Psalm of Fortitude

A Psalm of Resignation

A Psalm of Patience

A Psalm of Subjection

A Psalm of Counsel

“The Schoolhouse on the Plain”

The Fly in the Ointment

Birthday Lines to K. B.

A Christmas Greeting to K. B.

What the Heart of the Poet Said to the “Bulletin”

The Death of President Lincoln


Because “Australia is the Unit,” and because Joseph Furphy was a pioneer, this slight tribute to the genius of the Man, is offered for the appreciation of the people of the Commonwealth of belles-lettres.

Editor’s notes:
belles-lettres = (French, literally meaning “fine letters”) literature considered to be fine art, particularly regarding literature which is entertaining, refined, and sophisticated; literature of an aesthetic or artistic nature, rather than having an informative purpose

K. B. = Catherine (Kate) Baker (1861-1953), a friend of Joseph Furphy; she was a major advocate of Furphy’s literary works and successfully campaigned for the critical recognition of his novel Such Is Life