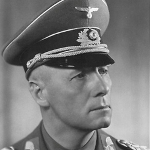 Following are some excerpts from The Rommel Papers (1953), which reproduces some letters from Rommel to his wife, in three of which he mentions Australian soldiers. Erwin Rommel was the German field marshal who led the German and Italian forces in North Africa during the Second … END_OF_DOCUMENT_TOKEN_TO_BE_REPLACED