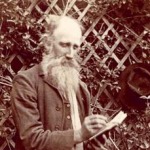 Philip Durham Lorimer was born in Madras, India, on 3 June 1843 to Scottish parents, Alexander Lorimer (a garrison assistant-surgeon) and Charlotte (Phillipa), née Henderson. Philip attended the Edinburgh Academy from 1854 to 1859, then migrated to Australia, arriving in Sydney in 1861.

Lorimer travelled throughout New South Wales and Queensland, working with overlanders to drive sheep and cattle. He also later travelled around Victoria.

He had several disappointments in life: Shortly after his arrival, he met and fell in love with a woman in Sydney, who died just a few years later (in 1868); he became very ill with “Gulf fever” for a while, from which he recovered; and he invested heavily in a business which subsequently failed.

Perhaps it was a combination of these disappointments that led him to take up the life of a wanderer, travelling from town to town, visiting bushmen’s huts, diggings, farming properties and stations, often paying his way by writing poetry for others. He was well-known to editors of various country newspapers, to whom he sold his poems and occasionally some prose. Lorimer became known as “the Australian bush poet”.

Philip Lorimer had adopted a very solitary lifestyle, not only “on the track”, but also later by establishing a “home” in a cave in the Blue Mountains, which he used as a resting place during his travels, sometimes living there for weeks on end. He refers to his cave home in his poem “Returning To My Cave”.

Articles about Philip Durham Lorimer:
“[The poor poet has been in the wars]” [28 July 1888]
A legal charge is brought against Philip Lorimer.
“Death of a bush poet” [17 November 1897]
Obituary for Philip Lorimer.