[Editor: This postcard incorporates a photo of an Australian soldier, from the era of the First World War (1914-1918). The postcard is undated.] 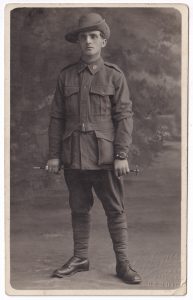 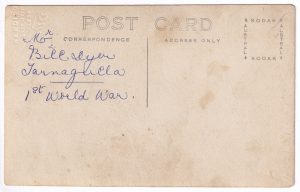 [Photo of an Australian soldier.]

[The manufacturer’s details are embossed in the bottom right corner of the postcard.]

The manufacturer’s details (Kalma, 57 & 59 Pall Mall, Bendigo), embossed in the bottom right corner of the postcard, are not easy to read (requiring the turning of the postcard to catch the right angle, under a strong light). However, the photographer’s details have been confirmed by references to the Kalma studio in Victorian newspapers. “Kalma” was the business name used by Ernest Wilkinson, a photographer, whose premises were located at 57-59 Pall Mall, Bendigo.
See: 1) “Later particulars”, The Bendigo Independent (Bendigo Vic. ), 24 November 1917, p. 3
2) “Trawool tragedy”, The Argus (Melbourne, Vic..), 22 November 1917, p. 7

The postcard was made on cardboard manufactured by Kodak Australia.

The handwritten text on the reverse of the postcard appears to have been added some years later (i.e. the writing is not contemporaneous with the creation of the postcard).

Tarnagulla = a town in central Victoria, located west of Bendigo