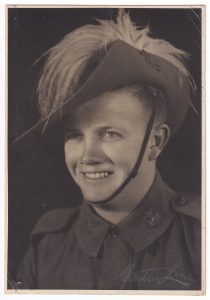 [The manufacturer’s details are written in the bottom right corner of the photo.]

The likely origin of this photograph would be the era of the Second World War (including some years before the war itself). There are two clues to the dating of this photo. 1) The relevant photographic studio (Martin Lane) operated during the Second World War. 2) The presence of the 17th Light Horse Regiment badge indicates a date prior to 13 February 1943 (when that unit was disbanded).

The reverse of the photo is blank (aside from some seller’s notations).