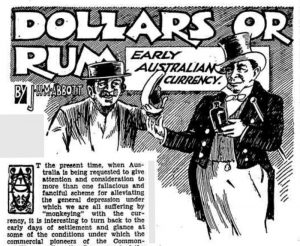 At the present time, when Australia is being requested to give attention and consideration to more than one fallacious and fanciful scheme for alleviating the general depression under which we are all suffering by “monkeying” with the currency, it is interesting to turn back to the early days of settlement and glance at some of the conditions under which the commercial pioneers of the Commonwealth, as well as the Government of the country, carried on business. One thing is very apparent from such a survey — that whatever was done to the currency was done with honest intention, and almost unavoidably. It was a matter of ensuring the survival of trade, in those days, rather than of expediency or political party interests — though the officers of the “Rum Corps” cannot be acquitted of something approaching “inflation” in the fashion in which they fixed the exchange value of the fiery spirit upon which some of them floated to fortune.

In the very first days of the colony of New South Wales the generally recognised medium of exchange was nothing else, but barter — rum, corn, and wheat were the principal things used as currency, and from the beginning rum was the great circulating medium. The wages of laborers were set down as so many gallons of rum, rewards were paid in it, and it is actually on record that a wife was purchased from her husband for four gallons of the red and ardent spirit. When Governor King took over command in 1800 he was startled to learn how varying and exorbitant was the value of this commodity — he found that spirit which had been imported for 10/ a gallon was being retailed for £2. Everybody traded in it. Even the construction of the church was partly paid for in rum, and admission to the first theatre established in Sydney could be obtained for a “nobbler.” Ten years or so later the most historic instance of the employment of rum as currency was connected with the erection of the hospital founded by Macquarie, the contractors for which were reimbursed with a monopoly of the spirit trade for four years.

In 1800 Governor King issued a proclamation which attempted to regulate the extraordinary varied currency then in circulation, and defined the values of the different coins in use as follow:—

Copper coins of half an ounce and a quarter were to do duty as pennies and half-pence.

But all the regulation of the value of specie could not supply a deficiency of it, and the scarcity of small coin in New South Wales and Van Diemen’s Land was responsible for the issue by merchants and business people of promissory notes for amounts even as low as threepence. Incidentally this paper medium became known as “currency,” as distinguished from the “sterling” or Government money, and led to native-born Australians being nicknamed “Currency Lads and Lasses,” in contrast with those who reckoned themselves “sterling” because they had been born in Great Britain. Many abuses crept in under this system, or lack of system, and a few years after his arrival Governor Macquarie set himself to devise a remedy for the chaotic conditions for which it had been responsible. 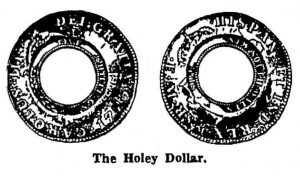 At the beginning of the nineteenth century the Spanish dollar — worth about five shillings — had become a world-medium of exchange. It was described by Governor Brisbane as “an invaluable coin, which has for centuries been disseminating its benefits over every other portion of the earth — a coin which, from the extension of its circulation over every part of the commercial globe, may justly be defined the money of the world. . . . Confined in its advantages to no faith, kindred, or Government, it has for ages been bestowing sterling benefits on the British and Protestant North American colonies; on the French and Papal Canadas; on Mohammedan India; and on the whole world.” In a little over twenty years the Mexican mints had issued over 24 millions of these dollars, but they were in such world-wide demand that it was found impossible to retain them in the colony. It remained for Macquarie to devise an ingenious plan for preventing their slipping away from New South Wales.

Towards the end of the year 1812 H.M.S. Samarang brought to Sydney a consignment of £10,000 worth of Mexican dollars, and Macquarie determined to make an effort to keep them in the colony, where they were badly needed for purposes of trade. So he issued a proclamation, the following extract from which embodies his plan. He directed that:—

Thus was the famous “Holey Dollar” born and promptly nicknamed. The small piece from the centre became known as the “Dump.” There were hopes that their issue would correct the currency troubles, but such was not to be the case. It was not long before counterfeit holey dollars began to make their appearance, and in 1821 the Bank of New South Wales found it necessary to issue an urgent warning to the public to beware of such spurious coinage. However, up to the end of 1828 Macquarie’s quaint coins continued in circulation, though at a considerably reduced value.

A General Order of December 16, 1828, made a beginning of the end for the “holey dollar,” when it stated that “ring” dollars would be received at the Colonial Treasury in exchange for bills on the British Treasury at the value of 3/3 a-piece, and that the “dump” would be redeemable for 1/1. Twelve months afterwards the business people of Sydney came to an agreement amongst themselves to accept the Spanish dollar in trade at 4/2, and the rupee at 1/9, and to give no more for them. From this time onward the Spanish dollar gradually became scarce in New South Wales, and finally disappeared. In Tasmania, however, is remained in circulation until September, 1842, when an Act of the local legislature decreed that after the 1st of October foreign coins should cease to be legal tender in the island.

Editor’s notes:
nobbler = a drink of beer or spirits; a dram of spirits