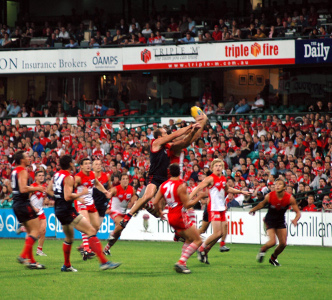 Australian Rules Football is the most popular sport in Australia, with thousands of amateur teams playing in local competitions, along with professional-level teams competing nationally. The game is usually referred to as “Aussie Rules”, “AFL”, “footy”, or “football” (room for confusion exists here, as soccer is also called “football” in various countries).

Australian Rules Football is the main code of football played in all states of Australia, except for New South Wales and Queensland, where rugby predominates. Aussie Rules is also played internationally, albeit in a minor fashion.

Distinguishing features:
The game is played on an oval ground, with goal posts at each end, by two teams of eighteen players each (with three interchange players, or “substitutes” who can replace other players at any time during the match). A football match consists of four quarters, each of 20 minutes playing time; although, if the game is delayed, such as by the ball going out of bounds, compensatory time can be added. The teams change ends of the oval after the end of each quarter.

Some distinguishing features of Australian Rules Football are:
* The ball is an oval shape (with a leather covering over the internal bladder).
* The ball is often kicked.
* Players in possession of the ball can be tackled.
* If the ball is caught after being kicked (a “mark”), a free kick is awarded; a player who has marked the ball may not be tackled so long as he does not move from that spot (but may be tackled if he moves on).
* The ball cannot be thrown, but it can be handballed (holding the ball with one hand and hitting it with a clenched fist to propel the ball forward).
* Players can run with the ball, but only if they intermittently bounce it or touch it on the ground.
* The game is played on an oval (i.e. a field), which is oval-shaped.
* Scoring is achieved by kicking the ball through the goal posts. There are four goal posts at each end of the oval: two tall posts in the middle, with a shorter post to the left and the right. A goal (worth six points) is scored by kicking the ball between the two tall middle posts; however, if the ball being kicked through the goal posts is touched by another player on its way through, it only scores one point. A “behind” (worth one point) is scored by kicking the ball between one of the tall posts and one of the side posts (the latter are known as “behind posts”).

The origins of the game are unclear, with claims being made that it originated from rugby, Gaelic football, an Aboriginal ball game, or a combination of the three. Considering the involvement of the game’s founders with English football, the rugby origin seems the most likely; although the early development of the game was such as to clearly establish it as a truly Australian sport.

Reportedly the game was originally begun as a sport that would keep cricket players fit outside of the cricketing season, although its popularity went on to eclipse cricket in many areas. Matches are often played on cricket grounds and, like cricket, Aussie Rules refers to its referees as “umpires” and the edge of the playing field as the “boundary”.

Geoffrey Blainey, in his history of Australian football, A Game of Our Own, said “The game is essentially an Australian invention. It arose in the late 1850s when the various kinds of English football were still in flux and, at the beginning, it borrowed extensively from these games and especially from Rugby. Almost at once it was a distinctive game. So quickly did Australian football move in its own direction under its own momentum, and so often did it devise or adapt new rules and tactics that, within twenty years, it was far removed from Rugby and soccer and was still changing rapidly.”