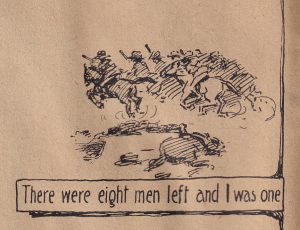 We have watched the morning sunlight leave
Its kiss on the sword and lance,
We have yearned for peace on the awesome eve
Of a well-planned night advance.
We yearned for home in the crowded days
When the pace was Satan-set;
In the hours when wrath was kept ablaze
With the force of arms well met.
But the days of strife are past and gone
With the war-host’s dying breath;
So listen to pale Jim Dawson’s tale
Of his troop, which rode to death:

II.
“The sun was lost in a pall of dust
That rose from the bursting shells,
The shrapnel harried us gust on gust,
And we could not reach the wells.
Wet flanks heaved hard at the drooping girth:
Half maddened with thirst and heat,
Our horses pawed at a famished earth
Shorn bare of its ripened wheat.
But an order came to my troop at length:
‘Prepare for a ride, you chaps,
And we’ll dodge those shells and reach the wells,
And water our mounts — perhaps!’” 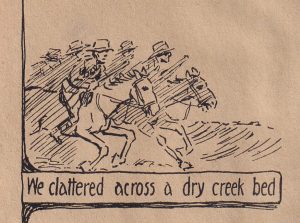 Thus Dawson spoke; and he told us more:
“We rode like a gale,” he said.
“Jack Johnsons furrowed the earth before
While the shells broke overhead.
Poor horses screamed and staggered and fell,
But the troop swept on and on,
And no man riding unhit could tell
Which one of his mates was gone.
We clattered across a dry creek-bed,
We clambered a stony rise,
And we sped downhill at a pace to kill,
With maddened and sightless eyes.

IV.
“The wells were covered by guns that spat
Defiance and death and hate,
The shrapnel carried away my hat,
And riddled my right-hand mate.
But down we swept like an Autumn flood,
Our horses madder than we,
Who paid no heed to the sight of blood
Or the scream of agony.
There were eight men left, and I was one,
Ten chains from the guarded wells,
But we spurred and sped through a hail of lead
In a gale of Turkish shells.

V.
“Then sudden the hostile guns ceased fire,
My old horse floundered on;
I saw the barbs of the tangled wire,
And I knew the foe had gone;
For far away on an outer flank
A force of our own men rode,
And following swiftly, rank on rank,
A Battalion sternly strode.
The guns of a Turkish Corps were trapped
At the cost of a troop laid low —
With an inward groan I rode alone
On a Waler, limping slow.

VI.
“I heard the rattle of rifle fire
Die out where the red dust blew,
I hacked my way through the tangled wire,
And I led my Waler through.
I gazed at the stranded guns awhile,
And the heaps of unused shells;
Then along the bed of a dry defile
I caught a glimpse of the wells.
I dare not look at my broken hack
As I felt my sad heart sink,
So I led him off to an old stone trough,
And gave him his last deep drink. 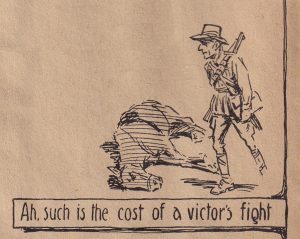 “My horse is dead, for he died that night
Where my old mates rest afar —
Ah, such is the cost of a victor’s fight
In the brutal march of war!
And though I stroll with a careless tread
Where smiles are many and cheap,
Perchance I’m hearing the whirr of lead
Where my old troop comrades sleep.
I’m a lonely man in a crowded world.
Where the gay crowds surge and hive,
And my heart seemed dead when a sweet voice said,
‘Thank Heaven, you’re still alive!’”

Editor’s notes:
This poem was accompanied by three sketches, by Cecil Hartt, which quoted the 3rd, 4th, and 7th stanzas, although the sketch with a quote from the 4th (“There were eight men left, and I was one”) was positioned at the top of the page, beside the 1st stanza.

chain = a unit of measurement, being for a distance of 66 feet (20 metres)

defile = a narrow passage, gorge, or valley between geological formations, usually between two mountains (or between cliffs, hills, large rocks, etc.); originally a passage so narrow that soldiers would have to march through it in a single line (can also refer to: a single line of soldiers, or to march in a single line)

gay = happy, joyous, carefree; well-decorated, bright, attractive (in modern times it may especially refer to a homosexual, especially a male homosexual; can also refer to something which is no good, pathetic, useless)

hive = a place where people are gathered together, being active or busy; to gather together (regarding active or busy people); to live together, reside in the same area (especially living in a crowded or overpopulated area or situation) (derived from a hive of bees)

Jack Johnson = a howitzer (a cannon with a short or medium barrel, used to fire shells at high trajectories, thus causing the shells to drop down almost vertically onto targets); derived from Jack Johnson, an African-American boxer who became World Heavyweight Champion in 1908, hence the reference to howitzers, as their large shells would “pack a punch”, or punch a large hole in the earth (during the First World War, a “Johnson hole” was a large crater made by the explosion of an artillery shell)
See: “Words, weapons, and WWI, No.I: Craters, Coal boxes and Jack Johnsons”, English Words in War-time

pall = a thick cloud of smoke or dust (can also refer to: a feeling of gloom; a negative mood; a heavy cloth draped over a coffin, hearse, or tomb; a coffin; a cloak, a mantle)