[Editor: This collection of poems, written by Henry Lawson was first published in 1900. The book was also published in two separate parts, entitled Popular Verses and Humorous Verses.] 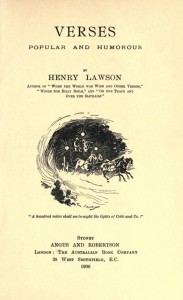 Author of “When the World Was Wide and Other Verses,” “While the Billy Boils,” and “On the Track and Over the Sliprails”

The Three Kings
The East is dead and the West is done, and again our course lies thus :—

The Outside Track
There were ten of us there on the moonlit quay,

Sydney-Side
Where’s the steward? — Bar-room steward? Berth? Oh, any berth will do —

The Rovers
Some born of homely parents

Foreign Lands
You may roam the wide seas over, follow, meet, and cross the sun,

Mary Lemaine
Jim Duff was a ‘native,’ as wild as could be;

The Shakedown on the Floor
Set me back for twenty summers —

Old Stone Chimney
The rising moon on the peaks was blending

The Lights of Cobb and Co.
Fire lighted, on the table a meal for sleepy men,

The Boss over the Board
When he’s over a rough and unpopular shed,

When the Ladies Come to the Shearing Shed
‘The ladies are coming,’ the super says

Years After the War in Australia
The big rough boys from the runs out back were first where the balls flew free,

The Cattle-Dog’s Death
The plains lay bare on the homeward route,

The Song of the Darling River
The skies are brass and the plains are bare,

Rain in the Mountains
The valley’s full of misty cloud,

A May Night on the Mountains
’Tis a wonderful time when these hours begin,

The New Chum Jackaroo
Let bushmen think as bushmen will,

The Dons of Spain
The Eagle screams at the beck of trade, so Spain, as the world goes round,

The Bursting of the Boom
The shipping office clerks are ‘short,’ the manager is gruff —

Antony Villa
Over there, above the jetty, stands the mansion of the Vardens,

The Way of the World
When fairer faces turn from me,

The Battling Days
So, sit you down in a straight-backed chair, with your pipe and your wife content,

Written Afterwards
So the days of my tramping are over,

The Uncultured Rhymer to His Cultured Critics
Fight through ignorance, want, and care —

The Writer’s Dream
A writer wrote of the hearts of men, and he followed their tracks afar;

The Jolly Dead March
If I ever be worthy or famous —

My Literary Friend
Once I wrote a little poem which I thought was very fine,

Mary Called Him ‘Mister’
They’d parted but a year before — she never thought he’d come,

Rejected
She says she’s very sorry, as she sees you to the gate;

The Paroo
It was a week from Christmas-time,

The Green-Hand Rouseabout
Call this hot? I beg your pardon. Hot! — you don’t know what it means

Saint Peter
Now, I think there is a likeness

The Stranger’s Friend
The strangest things, and the maddest things, that a man can do or say,

The Captain of the Push
As the night was falling slowly down on city, town and bush,

Billy’s ‘Square Affair’
Long Bill, the captain of the push, was tired of his estate,

A Derry on a Cove
’Twas in the felon’s dock he stood, his eyes were black and blue;

The Ballad of Mabel Clare
Ye children of the Land of Gold,

The Days When We Went Swimming
The breezes waved the silver grass,

The Old Bark School
It was built of bark and poles, and the floor was full of holes

Trouble on the Selection
You lazy boy, you’re here at last,

The Professional Wanderer
When you’ve knocked about the country — been away from home for years;

A Word to Texas Jack
Texas Jack, you are amusin’. By Lord Harry, how I laughed