The man who wrote “Nine Miles from Gundagai” 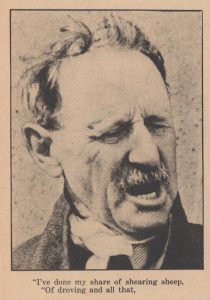 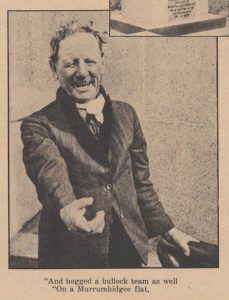 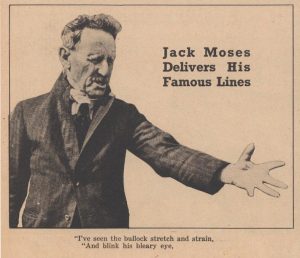 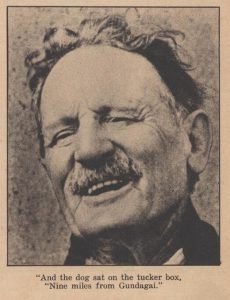 Everybody knows the lines — “The dog sat on the tucker box, nine miles from Gundagai.” Not everybody knows who wrote them, or has seen the author, Jack Moses. Aged 78, but lively as a wallaby, he remains “an optimist, a lovable cuss … the happiest thing in Australia.” As traveller for a wine firm for 55 years, he knows every milepost, shearing shed and showground in outback New South Wales.

Jack Moses is pictured reciting, with a wealth of Australian expression, the famous “Gundagai” first verse.

Five miles from Gundagai — not nine miles — is a monument erected by Gundagai citizens to the pioneers of Australia. It is surmounted by a dog sitting on a tucker box (this was the box in which bullock drivers carried their “tucker”). Although this monument, unveiled by Prime Minister Lyons, honors the Gundagai poem and its author, the real monument was the rough wooden dog and tucker box on a pole (shown on right), at the nine-mile post out of Gundagai. “I don’t know anything about any ‘five miles’,” says Jack Moses. “Nine miles was what I wrote, 50 years ago.”

Editor’s notes:
In the text underneath the photographs of Jack Moses are some lines from his famous poem “Nine Miles from Gundagai” (the article says “Jack Moses delivers his famous lines”):

“I’ve done my share of shearing sheep,
“Of droving and all that,

“And bogged a bullock team as well
“On a Murrumbidgee flat,

“I’ve seen the bullock stretch and strain,
“And blink his bleary eye,

“And the dog sat on the tucker box,
“Nine miles from Gundagai.”

tucker box = a box to store food in