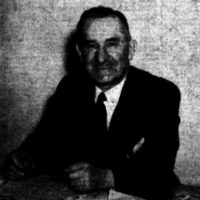 [Editor: This article about John Le Gay Brereton, by P. I. O’Leary, was published on “The Literary and Critical Page” in The Advocate (Melbourne, Vic.), 9 February 1933.] John Le Gay Brereton Poet, prose-writer, dramatist Not generally known, even among students of … END_OF_DOCUMENT_TOKEN_TO_BE_REPLACED

[Editor: This article by P. I. O’Leary was published in The Advocate (Melbourne, Vic.), 25 August 1927.] Australasian Authors’ Week Our duty to our home-grown writers Between the twelfth and nineteenth of next month Australian and New Zealand Authors’ Week is to be … END_OF_DOCUMENT_TOKEN_TO_BE_REPLACED

[Editor: This poem by P. I. O’Leary was published in The Advocate (Melbourne, Vic.), 29 April 1920. The poem was written about the Easter Rising in Ireland, also known as the Easter Rebellion, which began on Easter Monday, 24 April 1916, and lasted for six days, until the Irish … END_OF_DOCUMENT_TOKEN_TO_BE_REPLACED