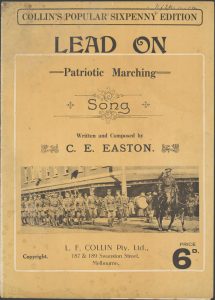 written and composed by

Lead on my sturdy lads —
Sons of our Austral soil —
Facing the foe where-ere you go,
At the sound of the Empire’s call —
Great glories will be won —
As you bravely man the gun —
For honour’s cause, and the wise, wise laws, of the great and the grand old England

On, on, my sunny lads —
Make the foe pay toll —
Avenge brave Belgium’s blood my boys,
And the deeds of a barb’rous foe —
Our Allies are as one —
Dishonor they all shun —
Supporting the cause, and the wise, wise laws, of the great and the grand old England

On, on, to victory lads —
The Union Jack unfurl —
Supported by our Allies’ flags,
Bloodstained, all torn as well —
A glorious combination
To float before the world —
For honour’s cause, and the wise, wise laws, of the great and the grand old England

CHORUS
Fighting for the land you love boys
sparing not thy Nation’s blood —
You will force your way to Berlin one day,
And replace the Eagle with the Dove

Editor’s notes:
This song does not include a year of publication; however, “Lead On” by Mr. C. E. Easton was mentioned in a 1916 newspaper, so it is reasonable to estimate that its publication occurred circa 1916.
See: Oakleigh and Caulfield Times; Mulgrave and Ferntree Gully Guardian (Oakleigh, Vic. ), 1 July 1916, p. 1

dove = peace (in iconography and literature, doves have been used to symbolize peace)

eagle = war (in iconography and literature, eagles have been used to symbolize war); the eagle has also been used as a symbol of several nations and states (e.g. the empires of France, Germany, Russia, and the Holy Roman Empire, and the countries of Mexico, Panama, and the USA)