[Editor: This is a chapter from The Eureka Stockade by Raffaello Carboni. A glossary has been provided to explain various words and phrases that may be unfamiliar to modern readers.]

My Trial proceeded, before the British Jury aforesaid.

As an honest man, I scorn to say anything of either of you; but address myself to my God, the Lord God of Israel, in the words of Solomon:—

“If any man trespass against his neighbour, and an oath be laid upon him to cause him to swear, and the oath come before thine altar in this house:

“I attended the meeting at Bakery-hill on the afternoon of the 29th November, Mr. Hayes was chairman, and the prisoner was on the platform. He made a speech to the effect, that he had come 16,000 miles to escape tyranny, and they (the diggers) should put down the tyrants here (pointing to the Camp). PRISONER ALSO TORE UP HIS LICENCE and threw it towards the fire recommending the others to do as he did.”

N.B. — At the next state trial of James Beattie, and Michael Tuhey, said witness George Webster, on his oath, was cross examined by Mr. Ireland, and stated:—

“Mr. Raffaello, was at the meeting on the 29th November.— (A gold licence was here handed to the witness.) — This licence is in the name of Carboni Raffaello, and the date covers the period at which the licences were burned.” — (Sensation in the Court!)

I was present in person, and a free man. Ab uno disce omnes: jam satis dixi. I hereby assert that I did not burn any paper or anything at all at the monster meeting; I challenge contradiction from any bona fide miner, who was present at said meeting. I paid two pounds for my licence on the 15th of October, 1854, to Commissioner Amos, and I have it still in my possession.*

V.R.
Printed by John Ferres, at the Government Printing Office.

The Bearer, Carboni Raffaello, having paid the Sum of TWO Pounds on account of the General Revenue of the Colony, I hereby License him to mine or dig for Gold, reside at, or carry on, or follow any trade or calling, except that of Storekeeper, on such Crown Lands within the Colony of Victoria as shall be assigned to him for these purposes by any one duly authorized in that behalf.

This License to be in force for THREE Months ending 16th January, and no longer.

REGULATIONS TO BE OBSERVED BY THE PERSONS DIGGING FOR GOLD OR OTHERWISE EMPLOYED AT THE GOLD FIELDS.

1. This License is to be carried on the person, to be produced whenever demanded by any Commissioner, Peace Officer, or other duly authorised person.

2. It is especially to be observed that this License is not transferable, and that the holder of a transferred Licence is liable to the penalty for a misdemeanour.

3. No Mining will be permitted where it would be destructive of any line of road which it is necessary to maintain, and which shall be determined by any Commissioner, nor within such distance round any more as it may be necessary to reserve for access to it.
4. It is enjoined that all persons on the Gold Fields maintain a due and proper observance of Sundays.

Examination of this gold-laced witness continued:—

“The prisoner was the most violent speaker at the meeting.”

Good reader, see my speech at the monster meeting. I am sick of this witness and I will make no further comments.

* The original document of the following Gold-license, as well as the documents from David Burwash, Esq., the eminent notary-public, of 4, Castle-court, Birchin-lane, City, London; and Signor Carboni Raffaello’s College Diploma, and Certificate as sworn interpreter in said City of London; together with the Originals of all other Documents, especially the letters from C. Raffaello to H. W. Archer, inserted in this book, are now in the hands of J. MacPherson Grant, Esq., M.L.C., Solicitor, and will remain in his office, Collins-street, Melbourne, till Christmas for inspection. — The Printers.


Source:
Raffaello Carboni. The Eureka Stockade: The Consequence of Some Pirates Wanting on Quarter-Deck a Rebellion, Public Library of South Australia, Adelaide, 1962 [facsimile of the 1855 edition], pages 109-111

*Sunt miserie in vita hominus, viro probo dolosis circumdari! Nulla miseria pejor = (Latin) “Misery that are the life of a man, a good man surrounded deceitful! No worse than the misery” (*rough translation)

A reproduction of Raffaello Carboni’s gold licence was printed in the book, as shown below: 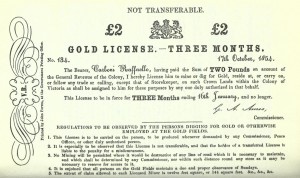