[Editor: This is a chapter from The Eureka Stockade by Raffaello Carboni. A glossary has been provided to explain various words and phrases that may be unfamiliar to modern readers.]

1. A full and fair representation.— Don’t you wish you may get it?

2. Manhood suffrage.— Thanks to the Eureka-boys, it costs now one pound. Cheap!

3. No property qualification of members for the Legislative Council.— The identical thing for “starring” on stumps to a fellow’s heart’s content.

4. Payment of members.— That’s the accommodation!

5. Short duration of Parliament.— Increase the chances of accommodation, that’s it.

What was the freight per ton, of this sort of worn out twaddle imported from old England?

How much does this new chum’s bosh fetch in the southern markets, and in the Victorian market particularly?

For my part I decline to answer, because I want to attend at the meeting. J. B. Humffray, is the Secretary of the League; his name is going now the round of the diggings; I wish to see the man in person; is he a great, grand, or big man? that’s the question.

When you see John Basson Humffray, you have at once before you a gentleman, born of a good old family; his manners confirm it, and his words indicate an honest benevolent heart, directed by a liberal mind, entangled perhaps by too much reading of all sorts, perplexed at the prosperity of the vicious, and the disappointment of the virtuous in this mysterious world of ours, but could never turn wicked, because he believes in the resurrection of life. He is looking some thirty five years old, his person is well proportioned, but inclining to John Bull’s. His prepossessing countenance is made up of a fine forehead, denoting astuteness, not so much as shrewdness, how, when and whither to shift his pegs in the battle of life; of a pair of eyes which work the spell; of a Grecian nose; of a mouth remarkable for the elasticity of the lips, that make him a model in the pronunciation of the English language. His voice, that of a tenor, undulating and clear, never obstreperous, enables his tongue to work the intended charm, when his head puts that member into motion; but the semi-earnestness of his address, his cool sort of John Bull smile, betray that his heart does not go always with his head. Hence he has many enemies, and yet not one ever dared to substantiate a charge against his character; he has as many friends, but not one friend, because it is his policy ever to keep friendly, with redcoats and gold-lace, at one and the same time as with blueshirts and sou’-westers.

As I cannot possibly mean any thing dishonourable to our old mate, John Basson Humffray, I may here relate what his foes do say of him.

Suppose any given square and the four pegs to be: 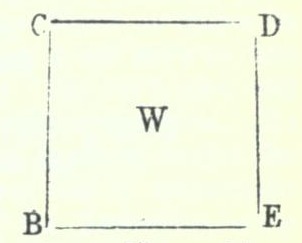 Let W., that is work, be the central point at C, E, and D, B. Now: John is sinking at Eureka with the red cap; and Basson cracks some yabber-yabber at D, that is, getting a sip of Toorak small-beer, as aforesaid. Again: when Basson puts on a sou’-wester to go through the main-drift with blue-shirts, then John feels entitled to tramp up to Camp, and there, somewhere not far off, toast on the fourth of July a Doctor Kenworthy; soon after, however, said Johnny bends his way to shake hands with Signor Raffaello, at the old peg Eureka, and helps him to rock the cradle. Further, to give evidence of his consistency, Humffray himself will express his sorrow to Peter Lalor for his loss of the left arm at the same peg Eureka; and, to atone for past transgressions, he will soon after call in both the prodigal John and yabbering Basson, and with his whole heart and voice, strike up, “God Save the Queen,” at peg Camp. As for bottoming his shaft at the central point Work, that’s a different thing altogether; and yet it must be admitted that he is “all there” in his claim, when the hole is bottomed, especially if a drive is to be put in with his quill. Sum total:— He was, is, and ever will be, John Basson Humffray, Esquire, of Ballaarat; Honi soi qui mal y pense, because his friends want him in St. Patrick’s Hall.


Source:
Raffaello Carboni. The Eureka Stockade: The Consequence of Some Pirates Wanting on Quarter-Deck a Rebellion, Public Library of South Australia, Adelaide, 1962 [facsimile of the 1855 edition], pages 30-31