[Editor: This collection of poems and short stories by Jack Moses was published in 1923. Jack Moses was best known as the author of the famous poem “Nine Miles from Gundagai”.] 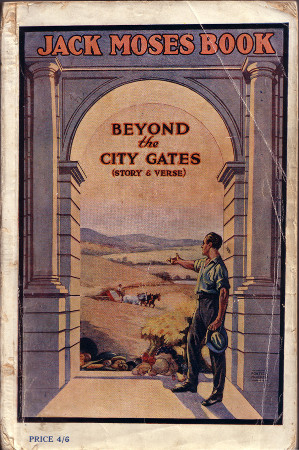 Beyond the City Gates

The Whip o’ the West

A Stranger from Somewhere

“Bred Out Where the Gum Trees Grow”

The Troubles of a Show Secretary

The Chap who Sells the Plough

On the Road to Bangalow

Don’t Growl at the Puddles

The Thing That Keeps the Bailiff Out

The Bigness of Larry Logan

When the Big Drum Beats

When the Pavilion Opens

Your Photo While You Wait

The Breaking of the Drought

When the Seasons Come Again

“If I could put the clock back”

“Onward — Westward ho! — Through the saltbush in the morning dew”

“I have seen the bullock stretch and strain”

“On the road to Bangalow”

“Mount Warning watching over all”

“You might owe Moses something, but you don’t owe me”

“And they answered to the call”

“’Tis hard to beat the Lachlan”

Beyond the City Gates

Wholly set up and printed in Australia and registered at
G.P.O., Sydney, for transmission by post as a book.

The Author desires to acknowledge the courtesies of the Editor of the “Sydney Mail” in allowing the re-publication in this book of the story “The Troubles of a Show Secretary.” Grateful thanks are also recorded for the assistance rendered by Mr. George Bell, Photographer, Bligh Street, City, and Mr. W. E. Vincent, N.S.W. Country Press.