[Editor: This cartoon, critical of Henry Parkes (Premier of NSW), was published in Sydney Punch (Sydney, NSW), 12 May 1877.]

A rod in pickle. 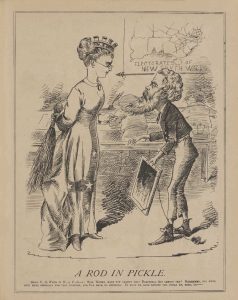 A ROD IN PICKLE.

Dame N. S. Wales to H—y P—k—s: Now, Henry, have you learnt that Electoral Act lesson yet? Remember, you were sent here specially for that purpose, and I’ll have no shirking. It must be done before you break up, mind, or ——

This political cartoon was created as a criticism of the then Premier of NSW, Henry Parkes; his name was not given in full, only as “H—y P—k—s”, presumably as a way of giving legal deniability, in case of being sued for defamation; although, the schoolboy in the sketch is clearly Henry Parkes. The persona of New South Wales (the teacher) is presented as a young maiden (it was common to depict the persona of NSW as a young maiden; however, the persona of NSW has also been depicted as “The Little Boy from Manly”).

mind = to bear in mind, or keep in mind (i.e. to remember, take note of, or be aware of something); to pay attention to, or to obey an instruction

rod in pickle = a punishment, penalty, retaliation, rebuke, or scolding which has been kept aside, or held in reserve, to use in the future; a reference to a rod, or switch (commonly made from narrow tree branches), used to punish naughty children or offenders (by hitting them with it), with the rod being stored in salted water or brine (sea water) so as to keep it supple (to stop the rod from becoming brittle and fragile)
See: 1) Joseph Swain (artist), “The rod still in pickle”, Getty Images [historical cartoon, showing a teacher (William Gladstone, Prime Minister of Great Britain) addressing a group of school boys (political leaders), with a switch stored beside him in a large jar, using an implied threat, “I am glad my young Irish friends have not forced me to adopt — ahem! — extreme measures!!”]
2) “Truant School Boys returning to their Duty!!, The British Museum [historical cartoon (1797), showing a teacher (William Pitt the Younger, Prime Minister of Great Britain) threatening some school boys (political leaders) with a switch, saying “I’ve had a Rod in pickle for you [for] some time”]
3) “A rod in pickle”, Sydney Punch (Sydney, NSW), 12 May 1877, p. 323 (5th page of that issue) [historical cartoon (1877), showing a teacher (Miss New South Wales) threatening a school boy (Henry Parkes, Premier of NSW), with a switch held behind her back]