[Editor: This article by E. L. Handcock is about the Senate candidature of “Dryblower” Murphy. Published in The Bunbury Monitor (Bunbury, WA), 7 September 1934.]

A poet comes to judgment 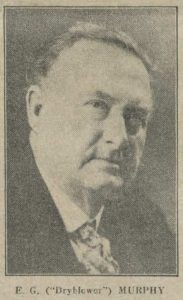 There is no better known name in the Press world of this State or perhaps in Australia than that of “Dryblower”, the pen name assumed by Mr. E. G. Murphy way back in 1894 when he first wrote for the “Coolgardie Miner” in the old camps hectic of young days. Since then weekly with little or no break he has helped to cheer us on our round with his poetry, sometimes sad, more times gay, and every time topical and to the occasion.

“Murphy” may rightly be termed “The Poet Laureate of the West”, and the reading of his poems is State-wide from Derby to Eucla, by the wayback station hands in Broome, on the Murchison fields on the vast Eastern Fields, on the farm, in the great timber country along the great southern, in the apple districts, where ’ere you be.

“Dryblower” Murphy has helped to cheer us on our way. In our times of affluence in our days of depression, during the Great War period, at times of National rejoicing, at times of woe, he has put our feelings into verse and prose, he has told us tales, he has written of our own country, has made us feel that even when things seemed drab and grey, that life was worth the living, and has been our tonic and our help.

Murphy knows our State as few know it, not the superficial knowledge gleaned by cursory examination or the reading of guide books, but by personal intimate, human and mixing with the people in their own environment and has become one of the people, one of us, in fact we call him “ours.”

Now he has struck out in a new line and has nominated for the Senate as an Independent Candidate. It is no new thing for writers, and poets too, to lead their country men in the politic arena. The Greeks did it, the Romans likewise and English history is full of such, in fact during the glorious Elizabethian period her heroes by sea, her statesmen on land, were poets, authors and dramatists. Let history repeat herself.

Murphy is no place seeker, no sycophant, no blow in, whose idea of politics is “What he can get out of it”, he is a man who has looked after his own business and done it well. Demosthenes, the great Athenian, said in his greatest oration the “De Borona”, ‘The man who is best able to look after his country’s interest is the man who can look after his own’ and Murphy fits the bill.

Services rendered demand recognition, Murphy (“Dryblower”) has for over 40 years rendered us service, service to one and all, now we have the opportunity of repaying such service, it’s a simple thing, just give “Murphy” a vote on election day. We may all rest assured that Murphy will not let us down, he will bring to political life something new, because he will be the interpreter of our life, political, social, business and pleasure, and with it a keen sense and a knowledge of men and matters equalled by few and excelled by none. It will be only common gratitude to vote “Murphy.”

Editor’s notes:
blow in = a newcomer, a new arrival from out of town, a Johnny-come-lately (may also refer to an unwelcome or an unannounced stranger) (also spelt with a hyphen: blow-in)